The site is secure.
The https:// ensures that you are connecting to the official website and that any information you provide is encrypted and transmitted securely.

The composition and cover of woody and understory species, along with the timing of stem growth, were characterized near minirhizotron installations at the south and north ends of the S1 bog in order to understand the relationship between root dynamics and the surrounding plant communities.
There are three data streams:
(1) Woody species basal area -- the number, basal area, and distance from the center point of all trees within a 5-m radius of each minirhizotron pair, which were quantified in 2011,
(2) Understory cover -- the understory vascular plant community composition and percent cover, which were surveyed in 1 m2 areas at four cardinal directions adjacent to each pair of minirhizotrons in June 2011, and
(3) Stem growth -- the basal area increment (stem growth) of nearby trees, which was quantified using automated or manual dendrobands in 2011 and 2012, respectively. 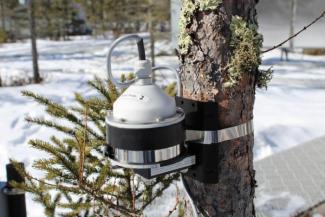 An automated dendroband installed on a spruce tree in 2011.

An official website of the U.S. Department of Energy and the USDA Forest Service